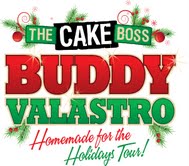 Candy canes, carols, and the Cake Boss! Celebrate the holidays this season with America’s favorite baker, Buddy Valastro, at the Murat Theatre at Old National Centre in Indianapolis, Indiana on Wednesday, December 5 at 7:30 p.m. Read a little bit more and then learn how YOU can see him for yourself!

Buddy Valastro, star of TLC’s “Cake Boss,” brings a special live holiday show the entire family will enjoy. Sharing the holiday traditions and stories from his family at Carlo’s Bakery, Buddy presents an all-new show full of holiday spirit and jingle bell rock. Demonstrating the techniques that have made him the most famous cake artist in the country, Buddy will share behind-the-scenes stories from his hit TV show, answer audience questions, and will bring several lucky members of the audience up on stage for cupcake and cake decorating. Pack up your sleigh and head on down to the show, ‘cause Buddy is coming to town’!

One of the centerpiece shows of the TLC network, a fifth season of “Cake Boss” began airing on Memorial Day. Viewers continue to celebrate the mouthwatering desserts and not-to-be-missed Valastro family moments occurring in bustling Hoboken, NJ, home of Carlo’s Bakery, which celebrates its 102nd anniversary this summer. In addition, Buddy’s second TV series on TLC “Next Great Baker” launches a new season on November 26th.

In late 2011, Buddy’s released his second book with Simon & Schuster. In Baking with the Cake Boss: 100 of Buddy’s Best Recipes and Decorating Secrets, Buddy shares everything a home cook needs to know about baking as he takes readers through the same progressive training he had in his apprenticeship at Carlo’s Bakery. A new book is set for release in November 2012.

The Homemade for the Holidays Tour is produced by Mills Entertainment based in Saratoga Springs, NY. An industry leader in alternative and branded live entertainment, Mills produces, promotes, and manages shows throughout the United States, Canada, and abroad. For more information, visit millsentertainment.com.

Buddy and I are giving away TWO TICKETS to this show on December 5th at 7:30 pm!!  If you are available and want to WIN then please do the following to be entered:

1. Leave a comment below telling me what your favorite cake flavor is

I am excited to have the opportunity to give this experience away to one of you.  I will be there with my family as well as I was given tickets in return for sharing this event.  All opinions are my own…I mean-who doesn’t like cake?

Through the Eyes of a Food Judge at the World Food Championships
Jimmy Dean Delights from Meijer Help Our Busy Mornings!
Skincare for ladies of a certain age~ That would be me!
Win a Family Prize Pack to the St Lawrence Fest in Indy!
« Tales of the World Food Championships on #KitchenSinkRadio November 8,2012
Tell it Like it is Tuesday- Etiquette! »