St. Patrick’s day is one of the most anticipated holidays of the year for bar owners and Irish-themed dining establishments.  Everyone wears green, the White River Canals in downtown Indianapolis are dyed green, and parades are held.

Even though this day honoring St. Patrick has been on the Irish calendar for almost 1000 years, it is hard to come up with a reason why we non-Irish celebrate this day when asked by a 9 year old.  Put on the spot and unable to come up with a quick response, my reply was that it welcomes the reappearance of Spring.  Not an accurate response , I know, but it was enough to pacify my son until I could delve into the history a bit further.

I’m sure many of us can remember when we were younger and the threat of being pinched ensured that we wore green to school that day.  I am not sure where or when this tradition started.  Probably just someone’s excuse to be mean. We all have our own version of what this holiday means.  What images are brought to mind when you think of the Emerald Isle?  For me it is the scenic beauty of the island,history, art,  melodic language, and U2.  For others it could be the IRA or the periods of extreme famine that brought thousands of Irish families moving west to America.

Originally this religious occasion was marked by eating bacon and cabbage since falling during Lent, meat was prohibited.  Food and drink seemed to be of minor consequence until the 20th century when Irish immigrants who still clung to their traditional roots served the bacon and cabbage here in the United States. It seems, historically speaking, that few continued to make the traditional soda bread and stew once they migrated to this country.  Like many traditions, one culture melded into another.  Later, corned beef was added to this tradition, influenced by the Jewish communities in and around New York City.

What does this mean for an American who is very clearly not Irish on St. Patrick’s Day?  Well, food is normally a significant part of every cultural celebration in this country  from Chinese New Year to Oktoberfest. At an event where beer and booze are prominently featured, such as at a pub, it seems to most that food is really an afterthought.

This tradition may stem from the hard times that Ireland has gone through and the fact that many may have turned to a pint now and then for comfort and sustenance.  As a result of a few of Ireland’s lamentable spots in history, Irish bars and pubs have become a symbol of St. Patrick’s day for some and a focal point for others.

I prefer to think that the green of the shamrock represents new life, the promise of new things to come and a chance to be renewed.  Like many generations before me, I will dye something green or make a green food to celebrate.  Last year I made quite a spread of Guinness Stew, Irish Soda Bread and green tea cookies.  I had to atone for the previous years mistake of making green eggs and ham.  I still haven’t lived that mistake down as my kids are still talking about that.

This year I gave an old cupcake recipe of mine an Irish themed spin.  I found this version on Pinterest and at The Plaid and Paisley Kitchen. I made a dozen for my husband and a few of our friends and another dozen that were ‘kid-friendly’.  The addition of Bailey’s Irish Cream to the icing adds a little something that leaves you guessing.  It’s just enough to give it a bit of flavor without overwhelming you with a liquor after taste. But, since it’s not for kids, just leave it out of their icing.  I split the batch in half and add the Irish cream to the adult half.

Another neat ingredient I used in their recipe was iced coffee milk by International Delight. Wow, I wish I had found this sooner and saved myself the trips to Starbucks! This is commonly found at Meijer with the Dairy products. Adding this to the icing gives yet another layer of the Irish Coffee taste to the cupcakes.

So whether you don your favorite green sweater (not I ,I have green eyes) or bake a loaf of Irish soda bread today, take a second to reflect that this holiday honors a country that, through it all, has maintained it’s dignity and cultural gravitas.

“May you always walk in sunshine. May you never want for more. May Irish angels rest their wings right beside your door.” 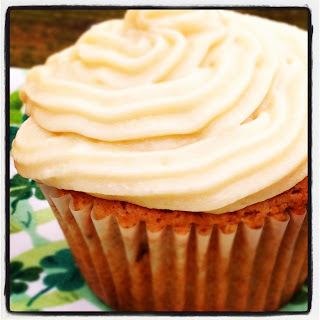 7.6.6
7
https://basilmomma.com/2012/03/st-patricks-day-and-a-bit-of-baileys.html/
All Rights Reserved; Basilmomma (www.basilmomma.com) – This recipe may not be distributed, sold or used for any commercial purpose (including sharing on social media platforms). The ONLY authorized use is by to share an IMAGE ONLY along with a link to the blog post on basilmomma.com where the recipe can be found. 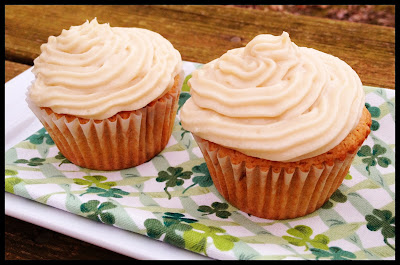