Originally Published in the Greenwood Daily Journal Saturday March 3, 2012
I just got back from a very informative writers conference in Nashville, Tennessee. I spent 4 days in the Opryland Hotel with 750 other woman who were writers, bloggers and entrepreneurs.
I was inspired and  moved.  I laughed and I  cried.   I was with several hundred other people who, like me, write in the wee small hours of the morning when their families are asleep or around their life and work schedules. Many of whom run companies online, write syndicated columns, published authors and bloggers.  I was with people who ‘Get It’.  You tell some people that you are a food writer and a blogger and you might get a blank stare or a request for more information.  There is something about the word blogger that just sounds a bit odd.
I left feeling like I was ready to change the world 1 recipe at a time.  OK, that is a bit of a stretch, but what I am getting at is I had become complacent, and this weekend was exactly what I needed to recharge my creativity and to remind myself to hang up and be present in my own life.
Coming home , and back to reality, I realize that I didn’t need inspiration, not really.  I have all kinds of ideas swirling around in my head, I just need to implement them.  I start lots of projects both big and small that I don’t see to fruition because I am afraid of the outcome.  I often stop short of completing a project because I fear that it will fail.  I say no to small opportunities that pop up every now and then for fear that I will not do a good job.

So when I came back home with a head full of confidence, I decided to take a step as say yes to something that a few weeks ago I didn’t have to courage to do.  I had been asked by an old friend to be a food judge at the National Maple Syrup Festival on March 10th in Medora, Indiana.  When I had first been asked I had reservations.  I had never been a food judge before. What did they do? What to they wear? What do they say? I had talked myself out of it immediately but told him I would let him know. To make it even more stressful, it was sponsored by King Arthur Flour, who is a fairly reputable company that sells baking supplies on the east coast.  The heat was on, but I had decided that I wouldn’t be able to do it, I wouldn’t fit the bill.

On Monday I made the call and without taking a breath I accepted the offer to be a judge.  I was given all of the instructions.  There would be a few others that will be there with me on the panel so I will have a bit of guidance.  Never mind that they are all chefs and 2 were on the cooking television show Top Chef. I am putting that out of my mind.
I have always wanted to do this but I had to take the first step and agree to do it, casting fear of failure aside, and be present.  What is the worst that can happen?
It sounds like it will be a fun event with live cooking demonstrations, historical reenactments, and lots and lots of maple syrup.  Right here in Southern Indiana!  My whole family is going to go and I admit I am a bit excited to see how my favorite maple syrup is made.
I can check this weekend off of the running list in my head of things I want to do but am afraid to try.  Having faith in your abilities is hard.  Not everyone is a walking, talking, confident person.  We all probably have something that we want to do we just lack the confidence or even more likely, the time to see it through.  I decided that I was going to write out my personal goals for the next year.  It will hold me accountable and be a visual reminder every day.
So in honor of my first ever judging opportunity I wanted to bring you a recipe that immediately caught my attention on the King Arthur website: Maple Bacon Pull Apart Biscuits.  I was hooked at the maple bacon.  Lets be honest, the bacon got me.  If you have never tried bacon in a dessert or sweet dish then you are really missing out. Sugar and bacon, not the healthiest combination but I believe in moderation.  I made this and it was gone in 10 minutes.  My kids did rock paper scissors for the last piece.  True story.
This is perfect for an Easter brunch served with fresh fruit (to balance out the syrupy bacon goodness) and a nice, strong cup of coffee.  Be careful though, you may run out.  Bacon combined with maple syrup seem to make people lose their good judgment and eat 2 or 3 biscuits each so make plenty. 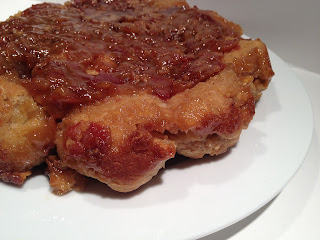 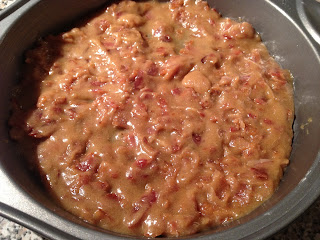 To make the syrup: chop or crumble the bacon in to very small pieces.  Combine bacon with the rest of the syrup ingredients, stirring well.  Spread in the bottom of the prepared pan. 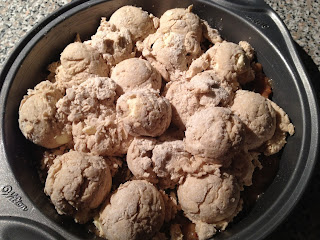 To make the biscuits: whisk the dry ingredients together in a bowl.  Work in the butter (I used 2 butter knives to cut it in) until the mixture is crumbly; some larger pea-sized pieces of butter will remain.  Add the milk or buttermilk, stirring to make a sticky dough.
Drop the dough in heaping tablespoonfuls atop the syrup in the pan. A tablespoon scoop, slightly over-filled, works well here. 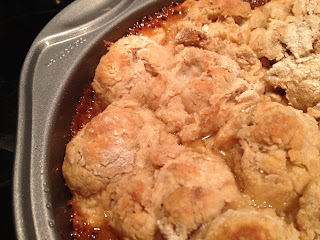 Bake the biscuits for 10 minutes.  Turn the oven off, and leave them in the oven for an additional 5 to 10 minutes or until they are golden brown.
Remove biscuits from the oven and immediately turn the pan over onto a serving plate.  Lift off the pan, carefully peel off the parchment,  and scrape any syrup left in the pan onto the biscuits.  Pull biscuits apart to serve.
« Oprah Next Chapter…with Paula Deen
Cheddar Beef Snack Bread »