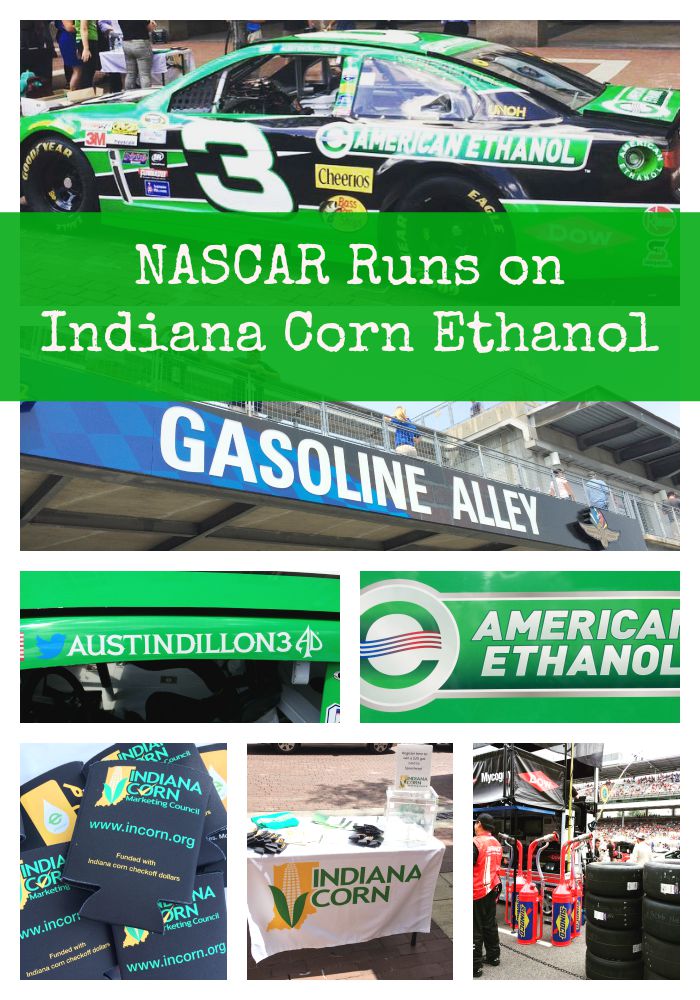 In the last few weeks I have had the opportunity to learn more about NASCAR, specifically, the American Ethanol made from Indiana Corn that fuels NASCAR. From a stalk of corn in a field to the fuel in a tank, corn not only feeds us, it fuels one of America’s passions- automobile racing. I think it’s awesome that NASCAR runs on ethanol, and that it comes from Indiana corn! 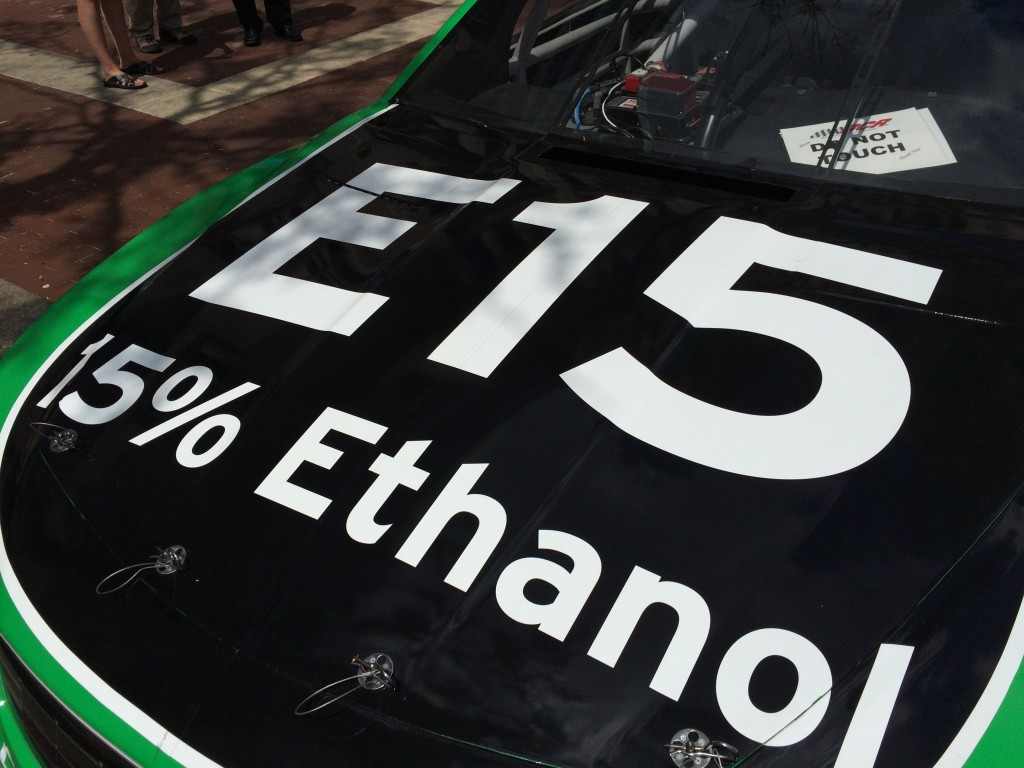 Last month, I asked: What is a Flex Fuel Vehicle?  Many of you shared that you do in fact have a flex fuel enabled vehicle but you didn’t use the E85 found at many local gas stations for a variety of reasons. Many of those reasons were due to inaccurate information given to you and frankly- it all can be confusing.  Hopefully in this 3 part series I can help with that or at least point you in the right direction for science-based information. 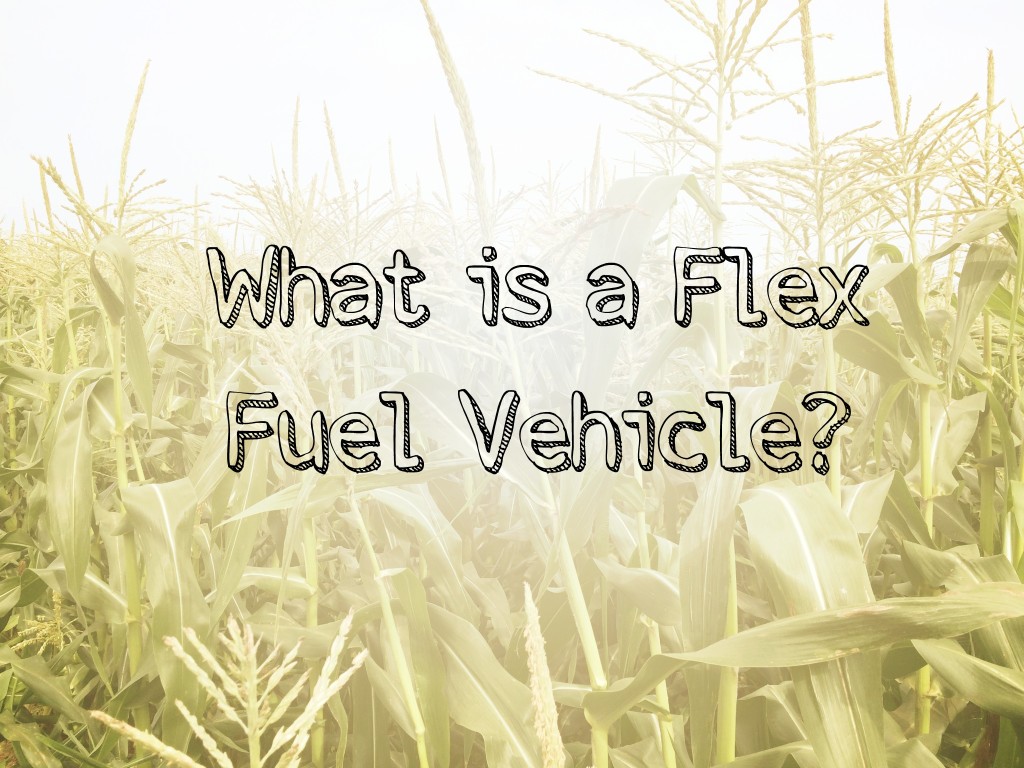 Many years ago, ethanol was put into production as a fuel so that farmers could make their own fuel and become self sufficient. Heck, the Model T ran on ethanol. Ethanol , or ethyl alcohol, is an alcohol fuel that is distilled from plants that have starch or sugar in them such as potatoes, beets, sugar cane and corn and more. Using what grows in excess in your particular area. For example, the country of Brazil is successfully run on ethanol (meaning this is what fuels their automobiles) and their ethanol is derived from sugar cane. That is a plentiful crop in Brazil.

In Indiana,and much of the United States, we create our ethanol from corn. This is a simple process (see HERE for a detailed explanation) in which the alcohol is produced as well as dry distillers grain (think food for animals), carbon dioxide (think carbonated beverages), corn oil and more. Every bushel of corn processed by an ethanol plant produces roughly 17 pounds of animal feed (source). All of this is to say whereas it is a processed fuel, it is a natural process that has been occurring for years. Indiana is home to 13 completed ethanol plants that produce over 1 billion gallons of ethanol a year from over 430 million bushels of corn. (source)

Where does NASCAR fit in?

Since 2008, NASCAR has led the way by becoming one of the most innovative environmental platforms in the United States. NASCAR strives to reduce their footprint through constantly improving technology and sustainable behavior. NASCAR has a partnership with Sunoco and American Ethanol and through this relationship they have launched a long-term plan to reduce emissions, use renewable energy and recycle in all of their 3 racing series’.

NASCAR has now run over 7 million miles on Sunoco Green E15, a 15% ethanol blend fuel that is American made from American corn. Through this use, NASCAR has reduced their greenhouse emissions by at least 20% while also increasing horsepower. 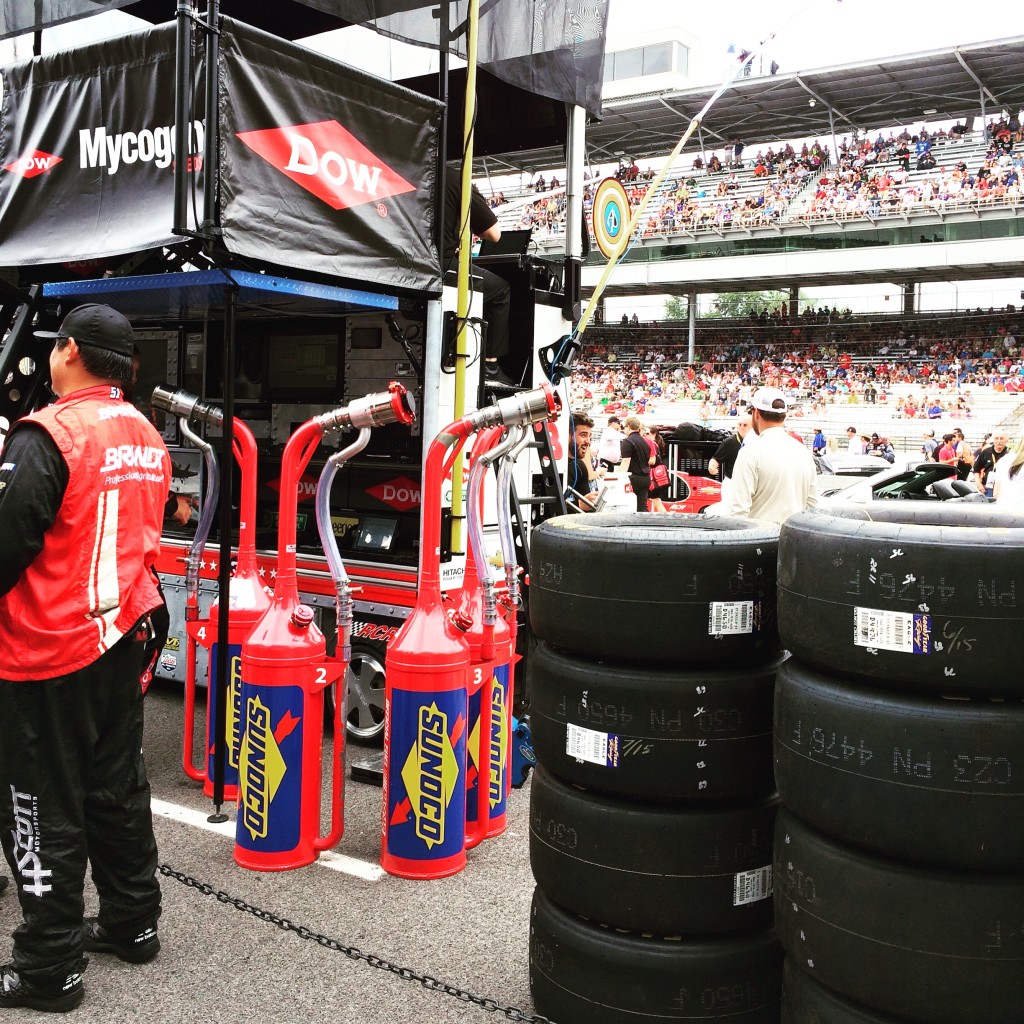 Those tanks each weigh about 100 lbs.You ought to SEE the guys that grab those up and fill the race cars while on a pit stop. Sunoco produces all of the NASCAR E15 fuel in Fulton, New York and delivers it to each race and practice facility.

I had the opportunity to attend the Brickyard 400 with my family as a guest of Growth Energy, American Ethanol and Indiana Corn so that I could get a ‘backstage look’ into all that goes on to present a safe and efficient race. I was amazed and as someone who has never really attended a race before, I enjoyed every bit of it. Ok, not the heat, but the rest of it. 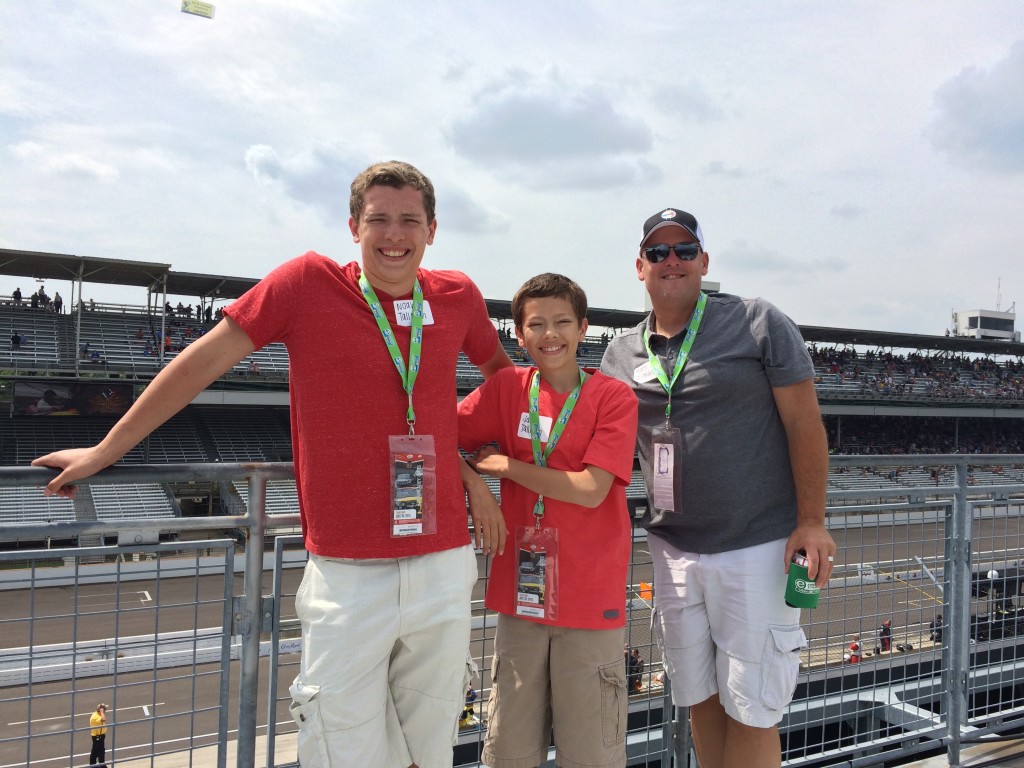 It was a beautiful and very sunny day!

I was able to talk to not only proud corn farmers about their choice to sell their corn for the production of ethanol, I also had the opportunity to ask questions (I had many) from those that work in the industry that provides our country with a clean, renewable and available fuel- ethanol. We all agreed that education and correct information on the why and how of ethanol use is key. Next month I will be digging a bit more into that and share what scientists involved in new innovations in this field have to say. 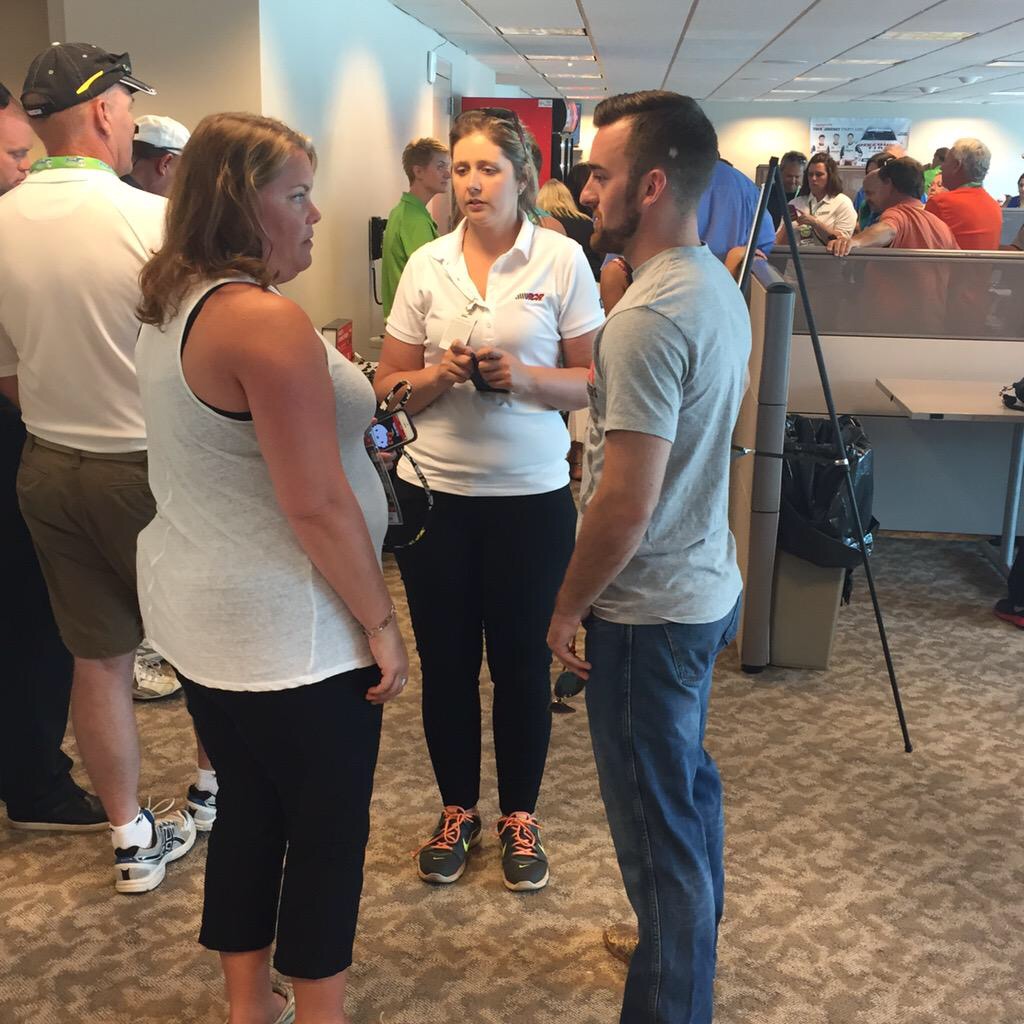 OK, not the best photo of any of us but I just asked him a question about why he uses ethanol in his own vehicle.

Did I mention that I had a chance to speak with Austin Dillon, the driver of the Richard Childress Racing, #3 car? Well, I did. Not only is he a NASCAR driver using ethanol on the track, he is also a consumer that fuels his personal vehicle on E85. I asked him why it is important for him to use ethanol on and off the track-

“Each time I fill my tank I am putting money back into this country. Ethanol is a clean fuel that is made by Americans and employs Americans. It provides jobs and I feel good about that” 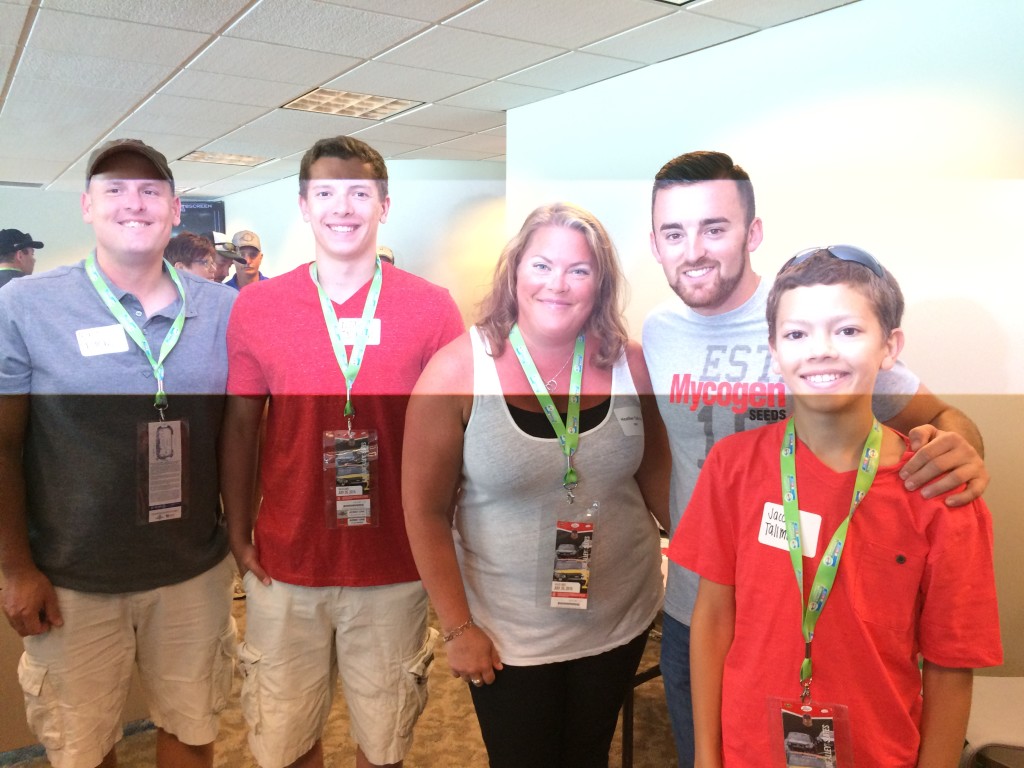 Ignore the odd markings. Not sure what happened there.

We took a tour of the hauler area, you know- the giant trailers that hold a few race cars, spare engines, the crew and enough technology to launch a space mission. They are amazing. So sleek and clean and really- stuffed with everything the crew needs to build, rebuild and test each car and in every environment. 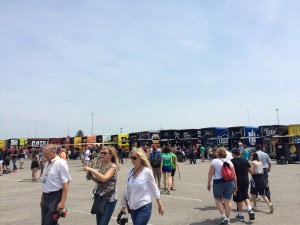 Row after row of haulers with the crews busy working and even gathering together for meals they made together. 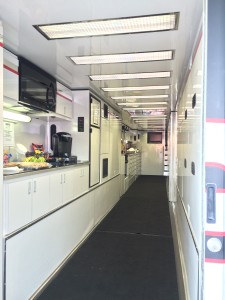 Everything has a place and purpose. Can they come to my house and do this? 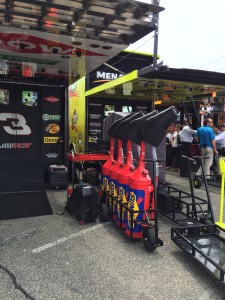 Don’t try to lift one. I did- I couldn’t budge it. 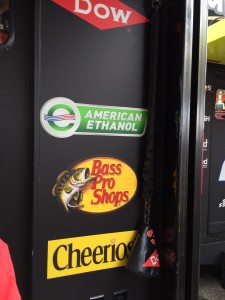 Just a few of the sponsors of the team. 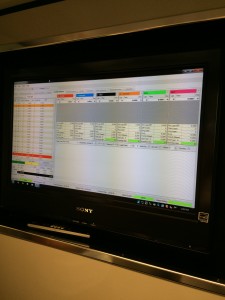 They monitor the weight of everything, the temperature, speed in practice and a million other things I don’t understand but were amazing to see in action. This is serious business and so much more than just driving a car. 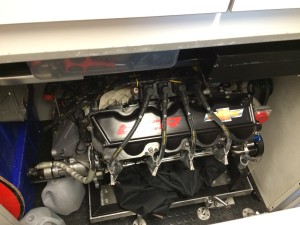 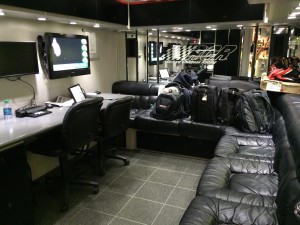 The hub of activity. Why not be comfortable? 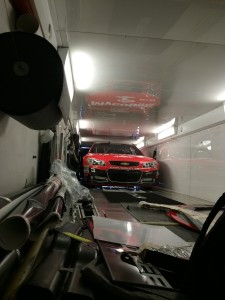 This is a spare care. It is housed above the main compartment. 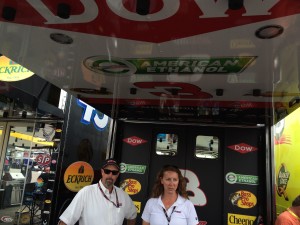 Members of the RCR Racing team going into detail on the function of the hauler, how weather really affects a race and how ethanol has changed the sport for the better.

I had a pass that allowed me to go pretty much anywhere- so I did. I spent most of my time observing the action in the pit. Right up and in there and I was so out of place. But everyone was great and I was even asked to get up in the action to watch. Not touch anything and standing perfectly still- but watching. I loved it. 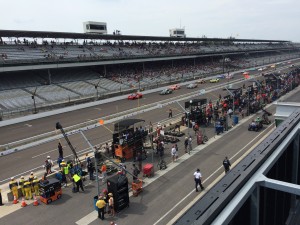 A practice lap at Saturday’s Lilly 250 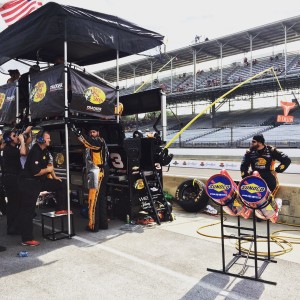 The crew is ready for a pit stop. Protective gear is on and everyone has a specific (and very fast) job to do. 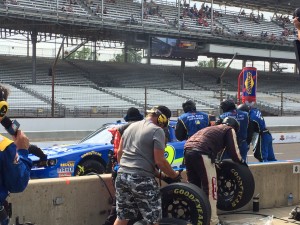 The driver has a job, of course, but the crew is key. Speed and safety are the most important components of a pit stop. 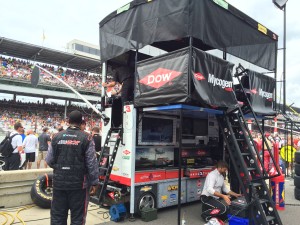 Another view of the control panel 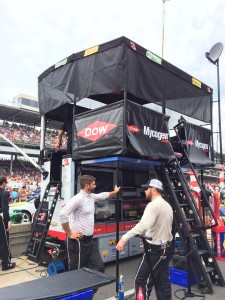 Did I mention it is like 150 degrees in the pit (not really). These guys have cooled suits and are constantly hydrating. 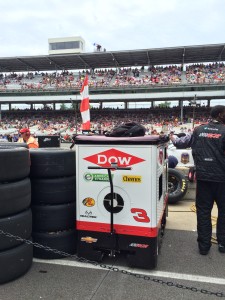 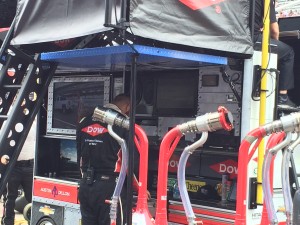 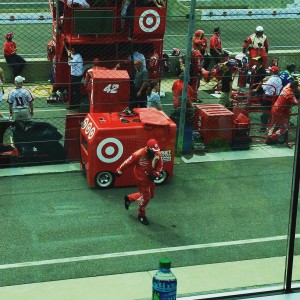 I thought people were pulling my leg- but the crew members really DO work out, stretch and get pumped for each pit. Speed and safety is THAT big of a deal. As a matter of fact, good crew members are traded like players on a sports team. They are a prized commodity. There are training facilities and many of these guys are former professional athletes.

All in all- it was an amazing experience. I spent several hours over the last few weeks with those who are at the helm of ushering our country into a new phase of self sufficiency through a clean, renewable and available fuel- ethanol. Seeing this in action on the track at speeds of over 170 miles per hour- indescribable. Stay tuned next month for when I geek out about the science behind ethanol and how it made it’s way to Hollywood!

Whereas I was invited to learn more about American ethanol- all opinions contained in this post are my own.

Please leave me a comment below if you have questions, concerns or want more information.

I will do my best to point you in the right direction!