~Repost from 2011 with updated recipe steps and edits~

Sometimes you just want to shake things up a bit, make something different but when you read the recipe you ask yourself

“What is this? Where do I get that? How much is this going to cost me?”.  I know the feeling.  I want to expose my family to food from different cultures but at the same time I don’t want to break the bank!

A friend of mine, who is from New Delhi, India, recently shared with me an ‘Americanized’ version of a recipe that her family loves.  She assured me that this was easy and my super-picky child would love it.  Love it he did!!  I think she was trying to tell me that I needed to expand my repertoire on here…It’s OK, I can take a hint.

This uses very little in the way of ‘exotic ingredients’ and I really recommend making the rice as well. It is so flavorful and just the perfect accompaniment to the lightly spiced chicken and the cool zip of the Raita. Cumin, cilantro and cinnamon are traditional Indian-inspired seasonings. Raita is a yogurt-based condiment. Read more about the history of this dip HERE.

I hope you try it and if you do….let me know what you think!

This is a quick weeknight meal that pulls you out of the ‘chicken AGAIN??’ doldrums. It is kid-friendly and may just open them up to a new style of cuisine. My friend says this is an Americanized version of entry level Indian food. I agree. But who could deny how easy this is?

I have made this both ways using a broiler pan AND a baking or roasting pan (My current go-to pan is this Carlisle 60306 Baking/Roasting Pan) dish. Both are easy and if you are afraid of burning your chicken when using the broiler then just keep it on low and don’t stray too far from the kitchen.

On a side note: invest in a good multi-purpose baking or roasting pan that can do double duty in the kitchen. Chicken breasts, pork loins OR whole turkeys. Just my 2 cents worth. 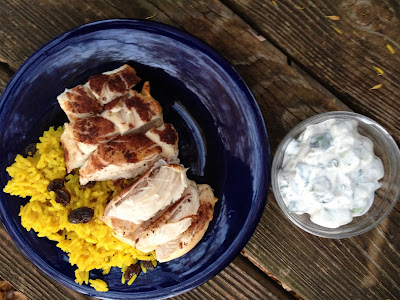 Cinnamon Baked Chicken with Raita
Coarse salt and fresh pepper
1/2 tsp cinnamon
1 whole cut up chicken (about 3 pounds) or 2 pounds of boneless breasts (what I typically use)
1 cucumber, medium sized, peeled, seeded and chopped
1/4 C plain yogurt
1/4 C sour cream
2 TB chopped fresh cilantro (or if you prefer use parsley)
1/4 tsp ground cumin
Preheat oven to 350 or you may alternately use the broiler.
In a small bowl mix the salt, pepper and the cinnamon.  Sprinkle it on the chicken.
Broiler directions:
Put the chicken on the pan, skin side down if you are using bone-in chicken, and broil (I use low broil) about 6 inches from the element for 15 minutes.  Turn the chicken, and broil until the skin is crisp and brown, about 15 minutes more.
Boneless breast directions:
Place seasoned chicken in a shallow baking dish and bake at 350 until the juices run clear, about 20 minutes.  Make sure not to over bake. Baking times vary according to the oven.
Meanwhile, in a small bowl, stir together the cucumber, yogurt, sour cream, cilantro, cumin and a pinch of salt and pepper. Keep cool until ready to eat.
Serve the chicken hot with a side of Raita on the side. 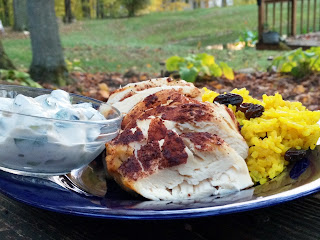 Golden Pilaf
Vegetable or canola oil
1 medium-sized onion, chopped
1 C uncooked rice (I did not use instant, I used a long grain white)
1/2 tsp salt
1/2 tsp turmeric (What IS turmeric? Click HERE to find out.For sale at all groceries)
1 dried bay leaf
1 pinch cinnamon, about 1/2 tsp
2 C chicken stock or broth
1/3 C raisins (I used golden and purple)
In a saucepan heat the oil over medium heat.  Add the onion and cook until soft.  Stir in the rice, salt, turmeric, bay leaf, cinnamon and stock.  Bring to a boil and cover.  Reduce heat to a simmer.  Continue this for 15 minutes.  Stir in raisins with a fork and continue to do this until all stock is absorbed, about 5 minutes.  Remove from heat and allow to stand for a few minutes before serving.