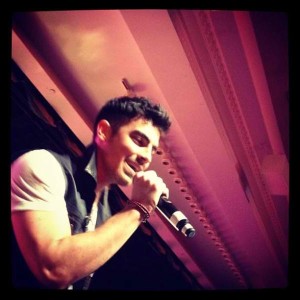 Hot on the heels of sold-out shows at Radio City Music Hall and the Pantages Theatre, the Jonas Brothers will appear live in concert on Friday, July 12 at Klipsch Music Center in Noblesville, Indiana.

The Jonas Brothers are embarking on their first North American tour in three years this summer as they hit cities across the U.S. and Canada with what will prove to be an epic concert experience for their fans. The “Jonas Brothers Live Tour” will take the band to more than 25 stops across North America, including Boston, Chicago, Las Vegas, Los Angeles, New York, San Francisco and Toronto. The tour announcement comes on the same day the group debuts its hot new single, “Pom Poms,” a new anthem that redefines their sound with an upbeat mix of pop and rock.

“This tour is about re-connecting with our amazing fans, who have waited patiently for three years to hear new music from us,” said the Jonas Brothers. “We can’t wait to put on an incredible show for everyone!”

The Jonas Brothers have sold a combined 20 million units worldwide, earned over 40 Gold and Platinum record certifications. They have won nearly 50 awards across the globe, including an American Music Award.

Pin this giveaway~ You guessed it-using my social share buttons below.

Please let me know in an individual comment below how you entered.  Each confirmed entry will go in to the drawing.