A few weeks ago, one of my coworkers was discussing their recent bad experience at a local  big box chain restaurant.  From the service to the food selection they were a bit let down.  I couldn’t help chiming in to this conversation.  I like to think I am sort of  the Zagat’s list of family friendly dining spots.  If I am going to eat out then I like to know a bit about where I am going, not eat out just for the sake of eating. Just because I am dining with children , does not mean I am relegated to eating at places like Chuck-E-Cheese. I think not. I have been a mother for 13 years and I have never been there and I am not going to start now!

We don’t dine out often but when we do I try to make good choices.  Not just in the selection of kids meal items but also according to who is having a special that particular day.  Yes, I am not ashamed to admit that I use coupons.  From the Entertainment book to Internet specials it pays to keep an eye out for deals.

I would like to think that this makes me a good consumer, others may disagree.   We mostly base our dining choices around who is having free kids meals.  It really helps when we are gone all day at a swim meet to maximize our dollar while away from home. Plus, this gives us a chance to try out local restaurants and support the local economy. Don’t get me wrong…we DO eat at places that are not sporting a good kids deal.  We do. But anymore that is few and far between!

So I gave my coworker my rundown of local eateries both in our immediate area as well as areas around Indianapolis.  There was the usual suspects, large chains like Bob Evans and Stir Crazy, which both offer free kids meals on certain days but I went on to give her my testimonial about a particular favorite of mine.  Scotty’s Brewhouse.

Scotty’s Brewhouse is a family friendly restaurant that has 8 locations in the Central Indiana area. We first discovered Scotty’s a few years ago and decided to give this locally owned eatery a try.  I was immediately hooked by the fact that they really catered to adults that were dining there with children.  The selection of food on the kids menu not only had healthy selections but they were fun too.  Chicken on a stick, turkey sandwich ‘Sushi’, fresh fruit, veggies and dip, meatless choices and nostalgic animal crackers as a treat rounded out the selections.

The atmosphere is lively and just loud enough to drown out the chatter of my little ones.  You can catch any sporting event on the 50 gazillion televisions they have and best of all….your children get served FIRST! Add to this that they get to choose a prize from the Treasure Box after they have eaten all of their food (and gotten Mom and Dad’s permission) and what you get is a satisfied customer.  Happy place mats with games, balloons for the kiddies, and free desserts for good report cards equals a happy dining experience!

I think over the last few years of super-sized meals for busy families on the go, a few key components have been lost in the food service industry.  Meals have gotten bigger, but the quality has not increased.  Neither has the ability to lock in the customer base that really is your bread and butter as a restaurateur : Parents dining with children.

Many families may only dine out once a week and that choice will be made wisely.  Not many advertise their specials and deals well but such is not the case with Scotty’s.  Scott Wise is the social media savvy owner of this local chain of eateries.  By following him on Twitter and Facebook I have been able to hone in on when he offers deals that my family will take part in.  From free kids meals on Sunday’s at the 96th Street location to Free kids meals on Monday’s and Saturdays at several of their other spots there is almost a special for every day of the week! There is also a make your own pizza station for the kids at the Broad Ripple location on Monday’s!

So next time you are going to dine out with your children it pays to look around on the web or even better listen to word of mouth suggestions.  I try to keep a mental list of who has what and when.  That’s hard to do with all of the other useless information I have floating around in my head. but my bottom line is this: If we want to dine at a locally owned restaurant it helps when they will treat you right.  Healthy meal choices and better yet, free kids meals draws me in every time.

I was struck by how inviting my son’s meal was last weekend when we dined at The Lakehouse, one of the off-shoot locations of Scotty’s Brewhouse, in the Geist area.  They took the traditional turkey and cheddar sandwich and turned it on it’s ear.  Spicing up the presentation, they took what could be considered to be a boring sandwich and gave it an interesting face lift.  Wrapping the ingredients ‘Sushi style’ this gave a new look to an old favorite.  I decided to re-create this at home and I have to say, it was a hit! 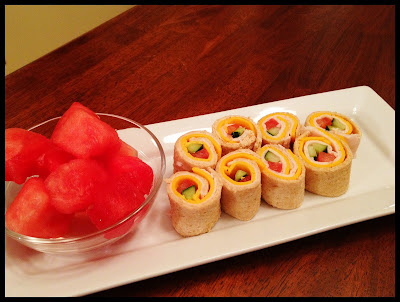 Carefully cut the crusts off of your bread to form a square.  One by one, use a rolling pin to flatten the bread.  This helps when it comes time to roll it up.
Layer 1 slice of cheese, 1 slice of meat and any matchstick sized fillings you choose.
Carefully roll this horizontally, jelly roll style.  Press to seal the roll.
Slice into disks and serve.  Great for a quick portable lunch with a side of fruit or veggie sticks & dip.

« Win a Chance to Visit Indianapolis Museums for FREE!
I Heart Brussel Sprouts…. »