Fort Wayne, Indiana based Best Boy & Co gourmet BBQ sauces, rubs, dessert sauces and mustard’s have introduced their product line to several of the new and expanding grocery stores in Indiana. With the growth of Giant Eagle into Indiana at their soon to open Carmel location, Best Boy has seen retail growth of 200% in the last year. You can find Best Boy at Whole Foods, Kroger (over 80 stores), Green Bean Delivery, Lucky’s Market, Earth Fare, Bloomingfoods and many more Indiana-based specialty markets. See retail listings HERE. 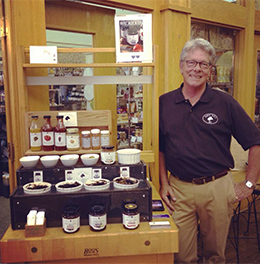 Best Boy & Co founder Wayne Shive is known to many in the artisan food world as the “Paul Newman” of Indiana. Best Boy donates all profits to qualifying 501c3 charities that concentrate on helping families and children from The American Red Cross to Doctors Without Borders to the Make a Wish Foundation to helping disaster victims within Indiana. Best Boy prides themselves in creating “gourmet for the greater good” and this philosophy still holds true today.

Best Boy & Co was founded in 2007 after friends urged Wayne Shive to share his culinary creations with others. Already a veteran entrepreneur, Wayne wanted his new company to become known for quality products, made in small batches. He also wanted people around the globe to benefit from its sales.
“Our products may be more expensive than other similar items but small batch, craft-made food products using the finest ingredients make these items a real value for the discriminating buyer,” said Wayne Shive. He sets the company’s standard high. Best Boy & Co. products must be the finest of their type.

“Special attention to natural ingredients, fair trade and organic if feasible, are blended in recipes that create a unique and superior tasting experience,” he said.
Best Boy products use Indiana ingredients whenever possible. When Wayne wanted a bourbon barrel-aged beer to use in a caramel sauce, for instance, he sought out an Indiana craft brewer and found one in Aurora that makes “a great bourbon barrel stout that tested better than I could have hoped in our sample product.”

That sample matured into a supplier relationship between the two Hoosier companies. Best Boy continues to partner with other Indiana produced ingredients whenever possible. Best Boy deli-mustard was designated the world champion by the National Mustard Museum in 2014. The sriracha mustard and bourbon barrel aged mustard also won medals of distinction from the National Mustard Museum.
Best Boy & Co products have also received the Indiana Artisan and Indiana Grown labels of distinction.

You can find Best Boy & Co products at over 100 retail locations both in Indiana and throughout the Midwest or online at BestBoyandCo.com.