I wasn’t quite sure how to start this series of posts. I have so many feelings about the family business that is Maple Leaf Farms. I am honored to be one of several people chosen to visit their facilities this year and trusted to tell their story. Maple Leaf Duck is another one of Indiana’s heritage brands that I am proud to work with- I hope can share even a fraction of what I learned in my time there as well as in the last few years of working with MLF directly.

I will begin by sharing the family story, then tips and myth-busters about the healthy meat that is duck, and finally a quick and easy summer recipe featuring duck breasts that can be made in under an hour.

Family owned and Indiana grown, Maple Leaf Farms provides a culinary adventure for their customers. Founded in 1958, Donald Wetzel started this company in Milford, Indiana. After raising over 280,000 in the first year alone the company expanded to over a million annually by 1964. Donald Wetzel passed away at a young age and son-in-law Terry Tucker took the reigns in 1968.

Terry made moves to become vertically integrated in 1976 by building their own feed mill in 1978 and because the Pekin variety of duck do not sit on their eggs. a hatchery was built in 1979. Serenade foods, the producer of fully cooked duck products, was started in 1976. In 1981 the company purchased C & D Foods which at that time was the largest supplier of duck in the United States. By controlling every aspect of the ducks life from the feed they eat to the environment they live in, Maple Leaf can ensure they provide the best product possible.

“Everything But The Quack…”

Maple Leaf literally finds a use for every part of the duck from the beak to the tongue, the feathers to the intestines. Nothing goes to waste. They formed Down, INC in 1984 to offer high end down products to hotels and private consumers. These products are available in their company store- Duck Down and Above. Later, Eurasia Feather Co was formed to cater to an international crowd at hotels, casinos and cruise ships.

In 1986 the Indiana duck plant was expanded and with expansion comes the need to constantly improve security, safety and health of the animals and products. Maple Leaf was proactive in making bio-security a top priority and in 1994 they built their first bio-secure hatchery followed by a bio-secure breeding farm in 1997. 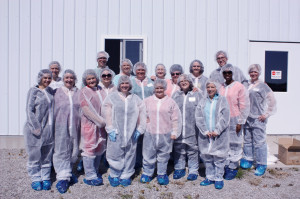 I witnessed this for myself when I toured not only a hatchery, but also a processing facility. Terry Tuckers sons- Scott and John were transitioned  into leadership roles with the company in 2001. Later on in 2004 Maple Leaf Biotech was formed.

Keith Reiland of MLF feed mill giving us an in depth tour of the whole facility. We traced the feed from kernel to finished product.

Maple Leaf has always exceeded the expectations and industry standards for food safety and quality. Through science-based testing procedures, they test incoming ingredients and finished products multiple times throughout the day. All facilities and machinery is also tested every step of the way.

Touring the lab at the feed mill and learning about their specific safety requirements.

Maple Leaf Farms is the first American duck company to receive Global Food Safety Initiative certification for version 6.1 by the British Retail Consortium by receiving a Grade A rating.  GFSI is an intensive audit process of food safety and quality programs recognized worldwide.

Duck feed is scrutinized for quality and safety. Each ingredient can be traced back to its source of growth and this information correlates to each and every duck and products that goes out the door.

Through their Trident Stewardship Program (duck well being,bio-security, and natural resources conservation) their partner farmers and company operations must follow specific standards and undergo audits in three key areas that contribute to the welfare of the animals, quality of the food products and success of the operations.

Their Pekin ducks are raised on family farms, housed in open barns where birds can roam, protected from wild animals, rodents & other
disease carriers, and routinely checked by trained MLF staff.
Pekin ducks are fed a diet of corn, soy & wheat, no animal proteins, no growth hormones (Banned since 1950s), no antibiotics, given probiotics to promote good health, treated with antibiotics only when prescribed by a licensed veterinarian.

The Reach of Maple Leaf Farms…

Maple Leaf now employs over 950 people in Indiana, Wisconsin, California, Michigan, Mexico and China. With proprietary strains of the Pekin variety, they also sell breeding stock and sell internationally. Maple Leaf recently welcomed it’s fourth generation of family members into the company with the induction of Zach Tucker in 2012.

Maple Leaf China was formed in 2011. Today, MLF produces 13-15 million Pekin ducks annually with a partnership with at least 150 family farms that raise their ducks.

I have witnessed and experienced for myself the attention to detail, commitment to safety and sense of caring for their community at Maple Leaf. Recently, MLF moved their world headquarters to an elementary school that was renovated and they donated the adjoining baseball fields to the community. This is just the tip of the iceberg of their core value system and philanthropy.

Next I will debunk some myths about duck and after share one of my favorite ways to combine summers bounty with the versatile protein that is duck breast! 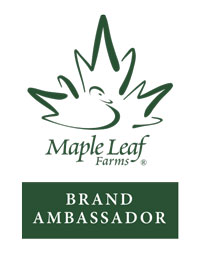 I might add here that I am not a paid spokesperson and I was not compensated to write this. I was invited to tour their facilities and given full access to the company and family.  All opinions are my own.