We are all scrambling to get ready to go back to school.  What better way to get your kids through that first week than the promise of a concert at Klipsch Music Center by Big Time Rush with Victoria Justice! 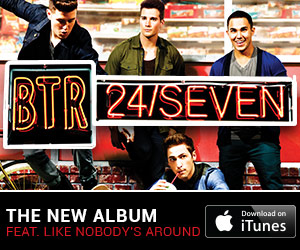 I have a family 4 pack of tickets to the Friday August 2nd concert for one of YOU and entering is simple.  The winner will be notified via email and have 24 hours to respond. We are on a tight schedule here because the concert is coming up QUICK! The winner will be responsible for picking up the tickets at a location in Downtown Indianapolis after their name is drawn.

Entering is a breeze~ do one a few things:

Enter between NOW-Sunday July 28th at 9 pm est.  I will draw a winner at that time.  I have NO control where the seats are and do NOT know where they are located.  Please see above for ticket pick up details.  Pick up address will be forwarded to winner.

For another chance to win enter at DesignHerMomma

Read a bit about the BTR Summer Tour Here

Both Big Time Rush and Victoria Justice have taken their on camera careers to the stage with the help of the global partnership between Columbia Records and Nickelodeon. Big Time Rush are currently recording their highly anticipated third album set to release in early Summer 2013. The release will feature brand new music that will debut on the upcoming season of the TV series, “Big Time Rush,” which averages 3.6 million total viewers. Big TimeRush was the most watched live-action series premiere in Nickelodeon’s history, with 6.8 million viewers. Elevate, Big Time Rush’s second album released by Columbia Records/Nickelodeon, was the follow-up to the group’s blockbuster debut, 2010’s gold-certified BTR. The band’s 2012 summer anthem single “Windows Down,” has garnered over 15 million video views and quickly climbed the radio charts becoming their third consecutive charting single at Pop radio. To date, Big Time Rush has sold close to 4 million singles.

Victoria Justice starred in the hit Nickelodeon series, Victorious, which recently won its second Kids’ Choice Award in the category of “Favorite TV Show.”  Prior to having her own series, Victoria starred in Zoey 101.    In 2012 she starred alongside Chelsea Handler and Johnny Knoxville in the Paramount Pictures’ feature FUN SIZE.  Victoria has been nominated for a Teen Choice, Kids’ Choice, NAACP Image, ALMA and Imagen Foundation Award.  She has graced the cover of Teen Vogue multiple times, Seventeen, Latina, and has made appearances on The Jimmy Fallon Show, The View, and Ellen.  Her smash hit single, “Freak the Freak Out” has been certified gold and the singer/songwriter has sold over 3 million digital downloads overall.  She is currently in the studio writing and recording for her forthcoming solo album.