You hear terms like fiscal cliff and you can’t help but be concerned or at the very least confused.   I actually had to research what the exact meaning was and I like to think of myself as politically astute.

I am a saver, planner, a rainy day fund creator if you will, so I understand checks and balances. The recent financial climate has really changed the way we look at food. We are either cutting back on our spending because we have to or pushing full steam ahead because we don’t think past the now.

Having said all of this I am not a coupon clipper, a menu planner or a bargain buyer. I just don’t have it in me. I am a smart shopper and I watch how I spend my money but I am not at the level that some of my lady friends are.

Over the last several years popular saving sites like The Queen of Free, Bargain Briana, Chaos is Bliss and IN Good Cents have helped Indiana shoppers get great deals both online and in the grocery isles. So I may not be chasing deals but I know where to look when I need one.

So this is the part where I eat a bit of crow. A few weeks ago I walked in the kitchen and caught my husband and son clipping coupons. I was shocked to say the least. I didn’t even realize they knew that they came in the paper let alone that things we actually buy were advertised there. That’s how little attention we have paid to these inserts over the years.

You would think my family had struck gold! They were giddy with the prospect of saving money and snagging a few deals. Of course I had to one up their discovery and while they were clipping away I sat down and planned our menu for the week. 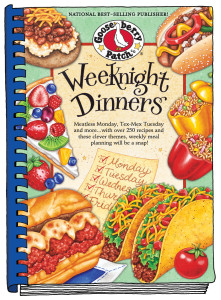 I had just received a preview copy of a Gooseberry Patch cookbook that is soon to be released called Weeknight Dinners. It is a one stop menu planning source and I tapped into this pot of gold.

Before I knew what I had done I plotted a course for six straight dinners, at home, that were not only interesting recipes but ones that promised leftovers. In our house that means lunch for my youngest and I.

Not to be outdone my husband went through his pile of coupons and matched what he had to my shopping list and sweetened the deal by skimming the store ads to scan the sales!

Genius! Why have we never done this before? We were inspired this time. We may do it again but that day snowballed off of the momentum of excitement. My kids got in on the action and I would like to think they learned something.

So I did something new, that I said I didn’t want to. It may not be a habit that sticks but at least that week we had a consistent dinner menu scheduled and that’s what I needed. Maybe all of this fiscal cliff talk is what motivated my husband to clip coupons which forced me to menu plan. Who knows.

One of our favorites that week was a simple and comforting white chicken chili. Truthfully, I could eat this every week. Hearty and filling, this quick dinner can be on the table in 30 minutes. Serve it with a salad and some tortilla chips for dipping and you are set. 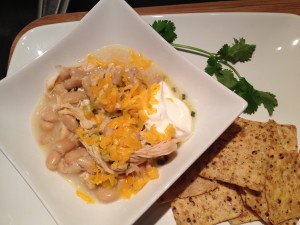 In a large Dutch oven sized pot sauté the onion and garlic in the olive oil over medium heat until translucent and fragrant.
Add the remaining ingredients and bring to a low boil, stirring frequently. Reduce heat, cover and simmer for about 20-25 minutes , stirring occasionally. Top each bowl with sour cream, cheese, cilantro, optional. 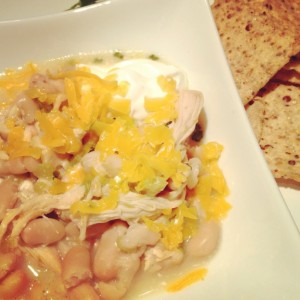 « Sage Fruit, The Produce Mom and the Biggest Loser on #KitchenSinkRadio 1/10/12
Weeknight Dinners~ A Gooseberry Patch Review and Giveaway »