I realized today, when I accidentally dialed my grandmothers phone number, that I have yet to have accepted her death in July.

I know she is not here, but somehow I keep thinking about calling her, talking to her.  Stuff like that.

We had a weird relationship.  I probably saw her more than any one member of my extended family, besides my uncle. Due to our proximity, it was easier for me to get to her.  She lived a mere 25 minutes from me.

The last few months of her life were spent in a rehabilitation facility.  I know that the goal was to get her to agree to the move to an assisted living facility but I never seemed to get on board with that.  In my mind, she was going home.  Her nurse service would come, we would continue to bring over food and pitch-in here and there.  But she was going home. 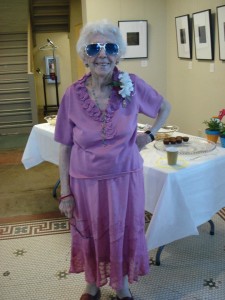 Grandma on her 90th birthday being sassy with the glasses on!
2 years ago

The last few days of her life were tragic to say the least.  We saw her on a Sunday, spent several hours with her in fact.  My husband, kids and I sat with her, talking to her and perking her up a bit.  We brought her a cookie from a special bakery near her house and Jacob scolded her when she wouldn’t eat it.  By then she was at 72 lbs.

Before we left for the day Matt and I spent some time with her, telling her how we felt but not completely acting like we would never talk to her again.  We were all “we will see you this week, yes-we will water your violets, yes-the Cardinals are playing…” but before we left her room we took note of her demeanor.  The long stares. The sad eyes.

I tidied her room, made sure she was cleaned up, arranged her Boyd’s Bears-stuff I do to avoid the inevitable.

Each of the boys talked to her, hugged her…loved on her a bit. It was weird for them.  She told them she loved them and to be good at school (It was July…).

Matt found the St Louis Cardinals game for her on the TV and sat with her while I avoided leaving.  She told him that she knew she was never going home.  I couldn’t look at her.  I knew she wouldn’t either.

He kissed her cheek, told her he loved her and I came to her bedside.

I brushed back her hair, told her to eat her dinner after we left and that we would be back Wednesday to see her.  She told me to make sure I didn’t work so hard and to take more time off.  She wouldn’t let go of my hand and for the first time I could see.  Really see that she was saying goodbye. 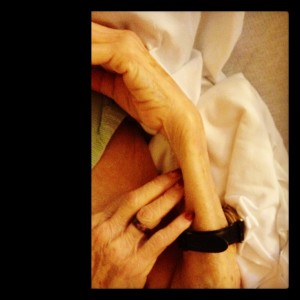 Her hands…I will remember forever

She pulled me close and whispered in my ear things that I cannot repeat and can not even say out loud.She made amends for something that I was no longer upset about and told me how she felt.  About me.

I promised we would be back and on Wednesday we were.  She was gone.. Physically she was there, but she was gone.  I spoke to her in her ear and told her we were there, she moved and responded but she did not speak.  It was the hardest thing I have ever dealt with.  The end of someones life and we were just standing there.

I wanted a doctor to see her…the nurse to seem more concerned. What had happened?  Why was I the only one concerned?

She was 92 and she had specific instructions as to her care.  We made her comfortable, cleaned her up, and comforted her the best we could.  The boys, Matt and I took that chance to tell her everything we needed to.  It was late in the night and time to go.  The boys and Matt said their goodbyes because  they knew.

I leaned into her ear and told her it was OK.  I would miss her more than I could know-forever.  But I knew she was so, so tired.

This woman taught me so much. I cannot articulate all that I learned to you now.  It was more of a way to carry yourself.  A confidence.

She believed in what I was doing even when I didn’t.  Even when she didn’t fully understand WHAT I was doing.  She rejoiced in my victories and stood firm in my defeats.

I will miss her, as I do today, forever.

I accidentally erased a voice mail she left Noah 2 years ago where she sang Happy Birthday to him.  I have been saving this message just to hear her voice.  Now it’s gone.

But really, she isn’t.  Her influence, her humor, her blunt and to the point criticism that I needed but others couldn’t handle.  It’s here, all around me. 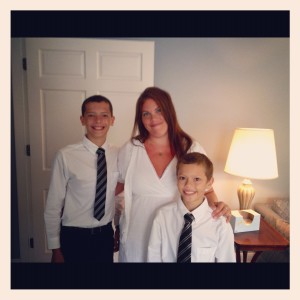 I read something at her service and truthfully-I do not know how I did it.  I had yet to have processed her death.

Now that her house is empty, her belongings are scattered to the corners of our family I have her voice in my head. My memories of her. That is worth more than any knick-nack or doll.

My hope is that I live up to what she wanted.  To what she whispered in my ear that day.  I carry this on my mind every day. 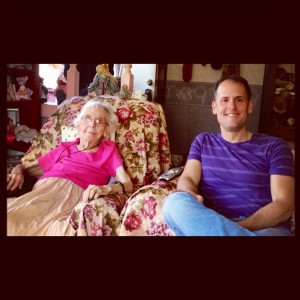 Grandma and her favorite person-Matt- on her birthday April 1, 2012

4 responses to “Talking with my Grandmother….”