If you had told me 10 years ago that I would be writing about craft beer, let alone drinking it, I would have laughed at you.  For years I scoffed at the claims that beer had any real taste profile like that of a good wine.  When I thought of cracking open a beer, nothing but negative images flooded my mind. You have to admit, the beer industry really directs it’s advertising to men. I rarely see a commercial with 4 women sitting around a table, sharing stories and sipping an ice cold lager.

Fast forward to the present and popping up everywhere are craft breweries, beer making clubs and websites devoted to this age old libation.  And it’s not just a drink for men anymore.  Craft beer has exploded in Indiana and recently I have met several groups of women who have tasting parties, themed dinners and take day trips to local venues.  All in the name of craft beer.

I blame my new interest on my husband.  He declared a few years ago that he wanted to visit every brewery in Indiana. Not only visit but collect a growler from each one.  He even purchased a special shelf from IKEA last year to display them in our sun room.  I hate to admit it, but he has a beautiful collection. Of course, I collect vintage glass so these unique vessels have some appeal to me.

It is impossible to visit as many breweries as we have and not try a few pints here and there. So, seeing a challenge, I decided to familiarize myself with something that before now, I had no interest in. If we go, my husband will want to have a conversation with me about what he is tasting so I at least needed to educate myself.

Being from Bloomington, I had many choices to start with.  Upland and Bloomington Brewing Company were great places to get my feet wet. I have been lucky enough to get to meet with one of the brewmasters of Upland and he explained to me what makes Indiana craft beer stand out among the rest. I also had an opinion formed in my mind that dark beers, like stouts were strong and pale ones, like IPA’s were weak. Boy was I ever wrong there.

I have soaked up this information like a sponge and was surprised to learn how involved the brewing process is.  From selecting the right hops to calculating the right amount of time to brew said hops is alchemy. Just like cooking, so you can see where I became hooked.  Even the type and color of bottle as opposed to a can makes a difference.

15 breweries later I have realized that I have a palate for wheat beers and stouts. I have learned how to taste the different flavors, that are Iike layers in a glass.  From a malt taste   to chocolate, honey, oatmeal, cherries and orange peel to name a few. Not to mention the aroma’s which range from a typical yeasty smell to a floral bouquet.

I went from thinking of beer as a one note beverage to seeing that it is actually very complex.  At last count there are over 70 styles of beer produced today and many if not all of them can be sampled at one of the many festivals that have become popular over the last few years in Indiana.  The emergence of the these festivals, contests and home brew clubs  have catapulted hop awareness into the mainstream.

I have started cooking with it more and more and I don’t mean beer can chicken.  Sauces, marinades, salad dressings and desserts have made appearances in my rotation and I can’t imagine what I used before I started using beer in my chili.  It adds a flavor that you just can’t duplicate, similar to cooking with wine.

I needed a bit of inspiration so over spring break I met with Dustin Boyer, the Foodie in Residence at Sun King Brewery in Indianapolis.  He was able to explain to me which beers would pair well with certain meats, tastes and for todays purposes, which one would be perfect for my bread pudding.  He sent me off with several varieties to try so in the name of food and recipe development I tested a few. To create the perfect bread pudding recipe, of course. 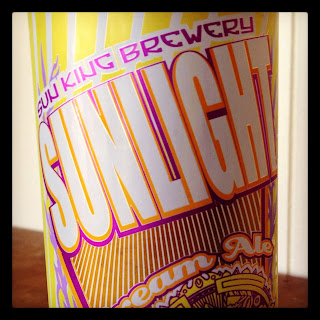 What I found is that the combination of their creamy wheat beer, Sunlight Cream Ale, a bit of sugar, orange zest and tart dried cherries, meld together to make a very decadent finished product. To make it even better, I made a creamy caramel sauce to drizzle over the top.

Over the last few years we have met many people who share my husbands love of a good, local ,craft beer.  We have had the opportunity to speak with many of the owners and brew masters who were cool enough to sit down with us to help me learn a little bit more about this misunderstood beverage. What to pair it with, how to drink it, at what temperature, etc.  You may not know that many of Indiana’s breweries are actually family friendly and many offer a really great selection of locally sourced foods.

I think I may have just given you a great idea for a Hoosier day trip, of sorts.  Go online, find a few breweries and plan a visit.  Make sure to bring some home, though.  Many a great recipe await you. 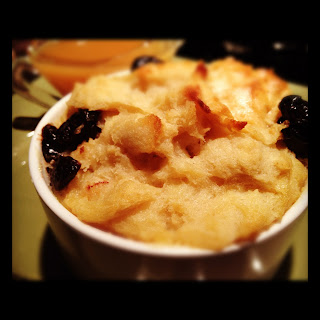 In a small dish add the cherries and just a bit of beer, to plump them a bit.  Set aside. Cut or tear the bread in to small chunks and set aside.  In a large bowl, whip the eggs.  Add the beer, cream and sugar. Mix to combine.  Fold in the bread, cherries (with beer) and zest.  While allowing the bread to absorb the liquids, prepare the baking dishes.
I like to make this in individual ramekins. Butter 8 ramekins well and add the mix to each one evenly.  Place in a large baking dish, then add enough water, around the ramekins, to go up half way (water bath).  Carefully place in an oven preheated to 350 degrees and bake for 45 minutes or until set in the middle.  Carefully remove from the oven, remove the ramekins from the water bath and allow to cool.

While this is cooling, make the optional caramel sauce. 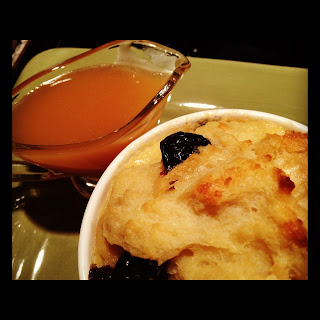 Fresh Caramel Sauce
1 C sugar
6 TB butter
1/2 C heavy cream
Heat sugar in a  medium sized heavy -bottomed saucepan on medium-high heat.  As the sugar begins to melt, stir with a small whisk.  As the sugar begins to boil, stop whisking.  You can swirl the pan a bit, but wait a minute and the sugar will turn a nice amber color.
At this point, add the butter, a little at a time, and whisk until the butter has melted.  Remove pan from heat and add the cream.  Whisk to incorporate, until smooth.  Use immediately, or store in refrigerator for up to 2 weeks. Re-heat before using again to get that smooth consistency. 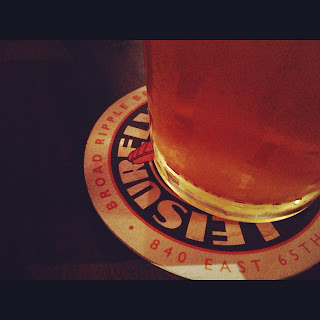 Here are a few of my go-to sites that I mentioned earlier and are definitely worth a visit:
Girls Pint Out
Sun King Brewery
Hoosier Beer Geek: A Beer Blog
Beer Advocate
Upland Brewing Company
Bloomington Brewing Company

PLEASE! Let me know what YOU think about craft beer in YOUR area? What drink-worthy brews do YOU favor?