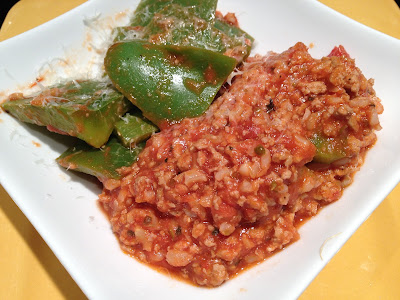 My son, he is really something else.  He gets his mind set on something that he wants to eat and hurricane force winds couldn’t blow that idea out of his mind.


I wonder where he gets it?


So last week he mentioned to me every day that he wanted stuffed peppers.  I explained to him that I really just made that when good peppers were in season.  I live in Indiana.  We are not in that season right now.  We are in down coats, wool socks and pale white faces season.
No good peppers I told him.  Pleeease Mommy he told me.

Those big brown eyes suckered me in.  I told him I would think about it.  So on Tuesday, after school, I was talking to a co-worker friend of mine named Cathy.  Cathy has a real soft spot for Jacob. I think she would take him if I offered.  Some days that thought has crossed my mind ????

She asked what I was making for dinner and without batting an eye Jacob piped up and said “She is making me stuffed peppers” with a sheepish grin.  I looked him dead in the eye and said that dish would have to wait. Cathy with her perfect southern Texas drawl replied ” You make that baby some stuffed peppers!”.

I had no where to run.  I was outnumbered.

SO on the way home I stopped for peppers.  They were pathetic.  After digging through about 27 of them I found 3 that were firm and large.  Before we got home I had decided that I would make my usual filling but add a bit more tomato flavor.  I added one 14oz. can of Red Gold Tomato Sauce to give the filling a bit of body.  I also decided that instead of filling the peppers I would cut them into large chunks and toss them into the pot.  Thus making stuffed pepper soup.

I didn’t tell him what I did and was pleasantly surprised when I saw the grin on his face when I brought his plate to the table.  Looks like my improvisation cut the mustard.  It was a great way to spend my last night at home before I headed off to BlissDom.

Link to my stuffed peppers: Stuffed Peppers OR Zucchini & Squash


**Stuff in your favorite stuff-able veggie OR add 1 can of tomato sauce and 3 chopped green peppers.  Simmer on low until green peppers are slightly tender but not mushy.