Nine years ago I awoke to the feeling that my life was about to change forever.  It was 2 a.m. and I was in labor.  I had waited for months to finally see this little person, even went several days overdue, and the moment couldn’t come soon enough.  I should have know, based off his screaming entrance into this world, that he was going to leave an impression on everyone he meets.  This child is a real individual!

So into the night we drove, the roads a sheet of ice, to the hospital.  The 20 minute drive took over an hour.  That was one long hour.  I had waited so long at the house, to be sure it was really time, that we almost didn’t make it to the hospital.  But lo and behold, after just making it to a LDR and before the doctor could even get there, my husband, 1 nurse and I delivered a healthy baby boy.  A 10 1/2 pound baby boy to be exact.  The nurse plunked this baby down on my chest after I got settled back in the bed and my first thought was
‘this baby is already the size of a 2 month old‘!

He was beautiful, just like his brother, and had already begun to leave an imprint on my heart.

Fast forward him 8 years, through tantrums, songs, creative poems, walks in the woods, bedtime stories, boo-boo’s and kisses, this vivacious little boy is really growing up.  He already has formed an opinion about who he is and who he wants to be.  He tells me he is going to be the class Valedictorian, he is going to Yale and he will be a scientist.  He has no doubts and I love his reckless abandon and confidence. 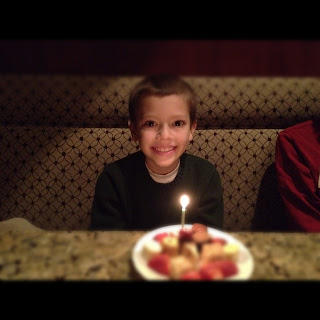 Every year for his birthday he balks when I ask him what he wants.  The last 2 years he has been saving money to buy what he wants so when it comes times for a gift from me he always asks for food.  Specifically, he tells me where he wants to eat.  One year it was Sushi at Ichiban.  Then last year, after a particular episode of Diners, Drive-in’s and Dive’s in which Guy filmed in Indianapolis, Jacob proclaimed that he wanted to get the Blueberry Goat cheese Pie from Three Sisters Cafe in Broad Ripple. 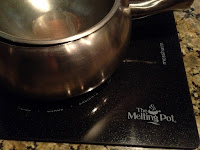 This year he set his sights higher and around about Thanksgiving he informed me that this year he wanted to dine at
The Melting Pot in Greenwood.  He had a plan all set : our little family would go to see Star Wars Episode 1 3D, then go to dinner, then come home and play Wii Sports Resort together.  There is NO way I an refuse this child a Fondue Feast so I got on the phone and made our reservations! 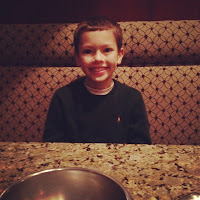 So Sunday morning, when he woke up, he wanted to check out the online menu.  He had decided that we were going to get the Big American Night out. He was excited to see all of the courses and had already formed our order in his mind.

As many of you may know, my family and I seem to be a magnet for bad service.  I am talking from the top to the bottom of the food chain it never seems to fail that we get wonky service.  I don’t know what it is about us.

Well Folks! That streak has ended!  Thanks to Andrew, our trusty Fondue Expert, we can no longer say we are bad-service magnets! I can not say one bad thing about this experience.  From the selection, the ambiance and the attention to detail , Melting Pot Greenwood gets an A+.  I have not ever given such high praise to a restaurant.  I couldn’t even find anything to complain about (my husband is still shocked that I can in fact NOT complain) .

All in all it was the perfect day.  I mean, how many of these can anyone say they actually have ever had?  The sun was shining, my kids were getting along and we had a great day together as a family.  This is all I could ever hope for……