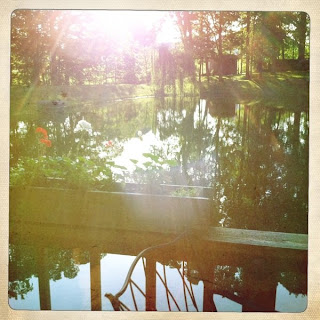 September, for many years now, has been a bittersweet month for me.  It is the month of my birth and that of my husband.  September also holds a few of my saddest days I have experienced.  Ten years ago today my husband and I were still coming to grips with a personal loss that at the time seemed like a fog I would never find my way out of.

On this September day with my emotions still so raw I sat with my son on my lap in those first few minutes of the news coverage.  News that changed our world as we know it.  I watched, live, as that second plane hit.  I could not believe what I was seeing. Like so many people all over the world there was a time of confusion, shock, anger and sadness.  Would this happen here?  Were my friends in Washington and New York safe?  My husband worked in downtown Indianapolis at the time.  I tried to call him and the lines were jammed in the hospital where he was.  My sister in law worked in one of the tallest and largest buildings in Indianapolis as well.  SO many people came to my mind at once.  I didn’t know if this was isolated to these 3 areas hit or would it spread.  Was this the beginning of something?

I could not tear myself away from the images of people who were injured, dazed and confused running from the buildings.  What would I have done?  Would I have run or would I have stayed to help others get out?  I saw so many run towards the danger. They weren’t thinking twice.  This touched me in such a profound way I had no words.  I just held my then 2 year old son and as the minutes went on it really seemed to sink in.

It was only when my son asked my why the daddies were flying out of the window that I had to turn it off.  I am so thankful that he doesn’t remember these images and even though many may disagree with this, I have never let my kids see those specific shots.  I think it is important for them to know what this country has been through but that is more than I can bear them to see.

It wasn’t long after that that my younger brother went to Afghanistan and Iraq.  Serving several tours for his country.  Long stretches that we didn’t hear from him.  We knew he was ill equipped for this task but he defended our country as so many have and that is something I am proud of.  I didn’t know what I could do to help these people.  I was a young mother in Indiana.

What I knew I could do is live.  Live honorably as these people would have wanted to do.  So many parents, brothers, sister, wives, fathers and friends left for work and never came home.  Never met their children, walked their daughters down the isles, felt the sand between their toes and sunshine on their faces.  I was still here.  I could do that.  My life had to count.

So my lesson I learned from this awful day and the hard ones to come was that I take no minute for granted.  Do I have to remind myself of this often, yes.  DO I catch myself spewing a litany of petty complaints from time to time. yes.  I am sure we all do.  But what I no longer do is judge.  I do not judge those who are different from me. Look different, have different beliefs systems.  What this day should have done was teach us all that.  I think for a while we all came together.  We were Americans, not defined by our nationality, language or political preferences.  We didn’t have to agree on a theology but we did have to take care of one another.  I think over the last 10 years we may have lost sight of this just a bit.

So today I will live.  For all of those who were so unfairly not given that choice.  I will offer up my thoughts for their families, their children and friends.  I will mourn what these people could have been and the lives that they could have touched.

One response to “Out of Many….One…”