You remember 1996..don’t you?  Ebay started, ‘Mad cow disease’ was a term you heard every where, Diana and Charles divorced, the Spice Girls had a #1 song and….wait for it….I married Matthew Tallman!

Didn’t you all get the invitation?  It was a lavish affair, really.  Nestled in the hills of Lawrence County, Indiana is a little baptist church.  We gathered all of our closest friends and family on  August 10 at 2:30 to join us on this hot and steamy Saturday.

We said our vows, listened to a few close friends sing…the ceremony was pretty much ‘by the books’.  The flowers were beautiful, the decor was perfect and not over stated and the bride maids dresses were not awful.  I had a few main goals and those were it.  Well, that and marrying Matt but I thought that was a given ????

After the ceremony we had a nice reception in the fellowship hall.  The entire thing was put together by my mother, her friends from church and the ladies of my husbands church.  We had food, fun, laughter and lots of pictures!  I wish my scanner could have kept up with all of the pictures I scanned…alas..it pooped out on me so I just have a few grainy pictures  to show ????

I kid when I say it was lavish.  It was a perfect day, though.  Everyone looked great, the church was perfect, so many family members were there and it was just what Matt and I wanted for that day.  We (with our family’s help too) put the entire shindig together ourselves.  We did not use a caterer, floral designer, coordinator, etc.  Just the expertise of the ladies we knew and a whole lot of research by me!

We were lucky enough to have my 2 Grandmothers there as well as Matt’s Grandfather (Gumps) and Grandmother Tallman.  Now, just my Grandmother King is still living.

I think when Matt married me he thought he had snagged a good cook, since my  mom is one herself.  Wow, was he wrong.  Some of the first few things I made were awful.  Just awful.  Poorly times roasts that we ate at 10 pm, undercooked food, over spiced or bland.  I have many stories….

But one thing I made that I got from the Campbell’s Cookbook was what he affectionately calls : Chicken Slop.  I am not kidding.  To this day, if he feels tired, bad or just wants something yummy and comforting he asks for this.  We just eat a bit, not much, since it is high in sodium and really just all from a can.  It’s one of those things you hate to admit you like but you do.

So in honor of our 15th wedding anniversary today I bring to you….Chicken Slop!

Cook the noodles, set aside.  Cook the chicken in a little olive oil and set heat to low.  Add the soups, broth and cheese.  Stir until bubbly and combined.  Remove from heat and add the sour cream.
When I am REALLY trying to be fancy (kidding here) I sprinkle with Hungarian paprika and parsley.  Sometimes instead of all the broth I use part white wine and part broth.  See…fancy ????

Pour the noodles into a large dish and ladle over the sauce.  Done!

I have to admit this is tasty in a ‘comfort food of your childhood’ kind of way.
Matt came in last night, saw this on the counter and said he knows it’s our anniversary because I made Chicken Slop ????  So it’s more of a joke between us, I guess! 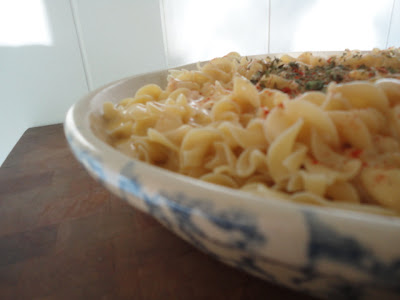